Idiosyncrasies of a Writer 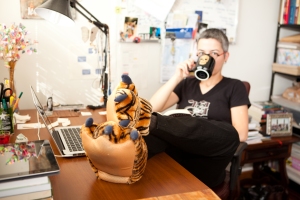 Computers, typewriters, pens. What would we expect to be a modern world writer’s tool? Never mind that. Habits, or mannerisms, which are peculiar to each of our literary idols, are more interesting.

Rumor says Alexandre Dumas, the father of “The Count of Monte Cristo” and “The Three Musketeers”, would never stop until he was done with a work. He did not like to be interrupted; therefore, he simply got undressed and handed his servant all his garments.

Some writers are known for working under the influence. Drugs, alcohol, and herbs were fuels for some artists’ minds. On the other hand, Balzac was a harsh abstemious; not concerning coffee, though.

Insects could be a problem when writing, especially for Truman Capote, who would make sure of the absence of these creatures in his area. Not a problem for Pablo Neruda, apparently. It is said the poet could write in any circumstance, as long as he had green ink at his disposal.

Sitting down to write? Not necessary. In fact, “The Miserables” and “Mrs. Dalloway” seem to be partners in the stand up literature, since Victor Hugo and Virginia Woolf weren’t big fans of chairs while working; they would rather stand. So would the Portuguese poet Fernando Pessoa. And it looks like Niestzsche would agree: “The sedentary life (das sitzfleisch—literally “sitting meat”) is the very sin against the Holy Spirit. Only thoughts reached by walking have value.” (cabinetmagazine.org)

At night, in the morning, either dressed or undressed, the fact is many authors have developed different quirks. I’m not sure mine are so peculiar. Let’s see — this is the first time ever my own idiosyncrasies are disclosed:

As for the time, since I deal with a lot besides writing, any time will do. As long as I have an insight. That means my note pad is my inseparable companion. You never know when ideas are to come.

When I’m at my office I start off by checking my email, my Facebook, and replying to messages. Second step, I chose a song — I will eventually turn it off because it will, undoubtedly, bother me — then I type.

Water is a must. Actually, liquids are necessary. If its morning, coffee, juice, or tea are very appreciated. At night, bourbon, whiskey, or wine are favorites — not all at once. Part of the ritual is to pick the drink, which will be one or two for the night.

After the first draft, the text needs to rest. This post, for instance, will not be submitted as soon as I’m done, which means: if I have a deadline, I’ll start early so I can give it the repose. It’s like putting the work in a drawer, except a virtual one, after it has dealt with me for long minutes, sometimes hours; they, as well, deserve some time off.

Back to the period issue, I love the night. When the sky is dark, the city is quiet. I hear a train, some cars, and dogs barking. But there is no loud music played by the neighbor, no one will call or stop by, and if there is such thing as an aura, or maybe a god of literature, I’m quite sure they are active at night. Don’t ask me why!

And finally, in case you were wondering, it’s time to learn: I write totally dressed up. No. In fact, living in a tropical country makes me sit as comfortably dressed as possible and still look descent in case someone knocks on my door. Right! Not at night.

It’s common sense writing is a lonely activity. Not that we are lonely creatures not willing to interact — okay, sometimes we are. The point is: each individual has a way, a method, idiosyncrasies.